Fences are much-used elements in landscape projects, for merely ornamental or functional purposes.

Lands Design includes a library of parametric elements for fences such as posts, balusters and rails to which different materials can be assigned. These elements can be customized by changing their parameters (width-height-separation) or by creating new elements from simple geometric forms or predefined blocks. 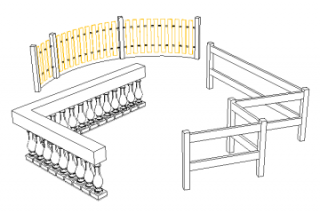 A Lands Design fence is built throughout a curve, which acts as an axis, and is composed of three components:

Lands includes a series of post and plank blocks made of different materials, but you can freely create and use your own library.

After selecting the post and plank, you can control the appearance of the fence with parameters like:

This website uses cookies to improve your experience while you navigate through the website. Out of these cookies, the cookies that are categorized as necessary are stored on your browser as they are essential for the working of basic functionalities of the website. We also use third-party cookies that help us analyze and understand how you use this website. These cookies will be stored in your browser only with your consent. You also have the option to opt-out of these cookies. But opting out of some of these cookies may have an effect on your browsing experience.
Necessary Always Enabled
Necessary cookies are absolutely essential for the website to function properly. This category only includes cookies that ensures basic functionalities and security features of the website. These cookies do not store any personal information.
Marketing
Any cookies that may not be particularly necessary for the website to function and is used specifically to collect user personal data via analytics, ads, other embedded contents are termed as non-necessary cookies. It is mandatory to procure user consent prior to running these cookies on your website.
performance
Performance cookies are cookies used specifically for gathering data on how visitors use a website, which pages of a website are visited most often, or if they get error messages on web pages. These cookies monitor only the performance of the site as the user interacts with it. These cookies don’t collect identifiable information on visitors, which means all the data collected is anonymous and only used to improve the functionality of a website.
Save & Accept